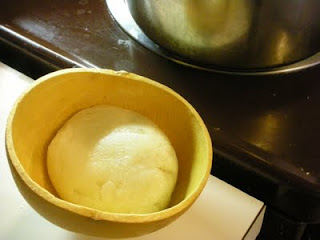 In July I discussed cassava (yucca, manioc) dough, and began describing how to make it--at least as far as grating the peeled cassava and pressing it to drain it for 2 or 3 days. Today's post follows up on that. After 3 days, you will have a dry, tightly pressed together clump of cassava. I added a cup of water to a blender, and blended the cassava to a dough/paste. That is what I'm using today. (I had several cups of dough, and have the rest stored it in the freezer). A photo at that previous blog posting shows the Ewe answer to banku: akple. Once one has the cassava dough, it is simple to make. I decided akple would go well with the yesterday's garden egg stew, so only made a small amount since I'm home alone this week. You might want to try this small recipe first, and if you like it, increase the recipe next time you make it. 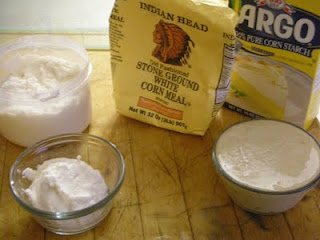 To make the corn dough, I put a cup of white Indian Head cornmeal in a blender to make it a little finer (optional), then mixed it in a bowl with a teaspoon of cornstarch (also optional) to make a slightly smoother dough, then mixed 1/2 cup of water into it. (NOTE: the photo shows the cassava dough on the left and the corn dough on the right.
Originally, akple was eaten mainly with fetri ma or fetri detsi, but now it goes well with other dishes, such as fried fish with pepper sauce or shito, or palaver sauce. As I said, I'm enjoying mine with garden egg stew. 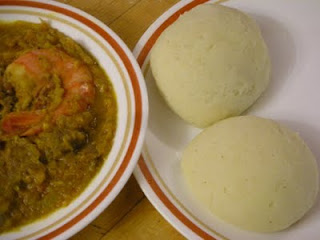 Thanks for a nice share you have given to us with such an large collection of information. Great work you have done by sharing them to all. simply superb. Photo Recovery