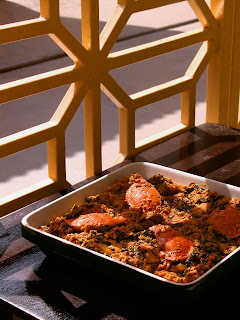 I often hear "Palaver Sauce" called "Nkontommire (Kontomire) Stew" or "Spinach Stew." This confuses me, as in my mind, "Palaver Sauce" often contains both beef and (usually smoked) fish and agushi (melon seed), whereas "Nkontommire (cocoyam leaf) stew is a less complicated version. Of course, as always, there are numerous recipes for either of these, so you should feel free to adapt the recipe to satisfy yourself, including creating vegetarian versions. Just be sure your recipe contains plenty of greens.
There are many stories of how the stew came to be called "Palaver" sauce. My best bet is that it comes from the Portuguese word meaning "word," or "speech," or "talk," palavra. While today's meaning of the word in West Africa is that there has been some kind of trouble arising from an argument, in earlier days it meant "a parley between European explorers and representatives of local populations, especially in Africa."
This is consistent with Alba Kunadu Sumprim's interpretation at her site, The Imported Ghanaian: ". . . when the Europeans came to Ghana and met with the chief in Elmina to negotiate trade, the food served at that Palaver - Nkontommire - took on its name."
Here are two ways to make it in the U.S. True-blue Ghanaians will see that I have unabashedly omitted the seasoning momoni lightheartedly described by Esi Cleland at her delightful "What Yo' Mamma Never Told You About Ghana" blog.)
Recipe #73: Palaver Sauce (time-saving version)


NOTE: When we prepared Palaver Sauce in Ghana, we included 4 soft-shelled crabs, as in the picture above. In Central PA these are very expensive, and I usually do not use them, but if they are available, feel free, or substitute shrimp in their shells!
At this point, there are 2 approaches to making the palaver sauce. The first, and easiest, is simply to add the rest of the onion, the tomatoes, tomato paste, pepper, the fresh fish, (frozen is okay, but cut it into chunks) and the salted cod, if using, and let it cook together a few minutes, then add the chopped greens, stir well, and let the mixture simmer, covered, for 15 minutes. As the sauce simmers, prepare the smoked fish (If you are like me, you'll remove the head, skin and bones, but suit yourself). Stir them into the pot, and let it simmer, uncovered, while you prepare the agushi as described for recipe #70 (or pumpkin seeds). Aften pouring in the melon seeds, let the pot simmer covered for 10 minutes without stirring, then uncover, mix and taste and adjust the seasoning, and let it simmer until most of the water is gone. This stew is good the same day it is made, but also good reheated and can be frozen, too.
The second way, the way we did it in Ghana at Flair, was the classic way to make it, where some of the ingredients are fried separately and then mixed together. 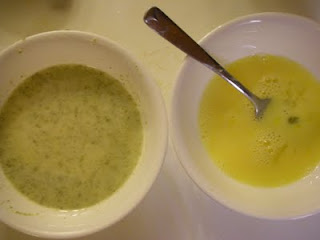 It was at step 6 today that I discovered that  I had barely 1/2 cup of melon seeds to thicken the sauce, and I wanted a thicker sauce. In a pinch, you can substitute a couple of beaten eggs (or even a cup of canned refried beans, or cooked, mashed beans, or a cup of cooked pureed eggplant). I simply added a tablespoon of water to a beaten egg, and added both the liquids to the stew at the same time, let it cook covered for about 10 minutes without stirring to set, and then mixed everything in and let the sauce simmer a few more minutes. It needed a little more red pepper, so I sprinkled in some dried red pepper. 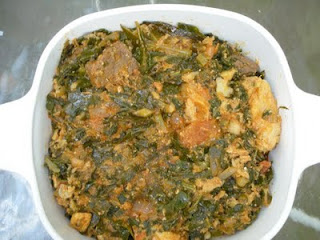 The resulting stew provides a friendly mix where a lot of interesting ingredients get along very well together without any palaver: a sauce to  enjoy with yam, potatoes, rice, or whatever starch you prefer. And now it's time to eat.
Preview: 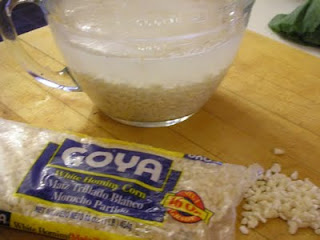 Today I decided to try again making my own fermented corn dough. I put some hominy corn on to soak, and I'll try tomorrow or the next day to grind it. Certainly I could use white Indian Head Stone Ground corn, but the flavor is different when using kernels.
Posted by Fran at 7:56 PM

Aah palaver sauce. I tend to make a similar one to the time saving version myself. I also mix zomi with peanut or coconut oil. I even mix diferent types of greens. Yours looks soooo good!

Thank you Ofo (do you go by Ofo or Anthia?). I'm waiting to hear you posted your photos of the sesame soup ;-)

For some palaver sauce, some people make there's dark green, whereas others may have theirs light green. What is the reason behind this?